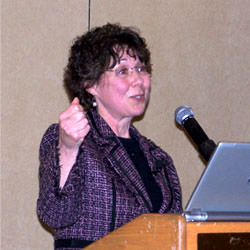 Sharon Dawes, a senior fellow at CTG, recently provided the keynote presentation for the annual holiday meeting of the NYS Forum and the Capital Area Technology Association. Sharon shared experiences and observations related to her work at CTG in the field of international e-government research. Held on Wednesday, December 19th at the Albany Marriott, the meeting was attended by nearly 200 members of the two organizations.

The meeting was convened by welcome addresses provided by Diane Taylor, chair of the NYS Forum Executive Committee and Joel Conklin, president of the Capital Area Technology Association Board of Directors.

By explaining how e-government and e-governance fit in a global context, Sharon emphasized how New York State initiatives impacted both locally and as part of the global progress toward more open and effective governments. She highlighted global social, technology, and political trends that are influencing governance, public management, and democracy, and how the purpose and goals of e-government initiatives vary from the most to the least developed countries. In the developed world, these goals usually include high quality public services and effective government management. In the developing world, e-government goals are more likely to focus on transparency, accountability, and infrastructure. Despite these important differences, however, security, equity, inclusion, access, and competence are universal goals.

Sharon gave examples of interesting e-government ideas emerging from countries throughout the world, drew attention to the limitations of benchmarks and report cards, and left the audience with suggestions about what they can learn from global e-government efforts.