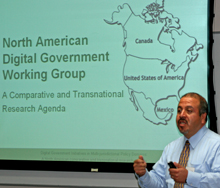 President George M. Philip welcomed 15 international scholars to a workshop hosted by UAlbany’s Center for Technology in Government (CTG) on October 14-15, 2009. The workshop is part of a four-year effort by CTG funded by the US National Science Foundation’s Digital Government Research Program. The goal of the grant is to create a framework for a sustainable global community among digital government researchers and research sponsors.

One of the main elements of this grant is a set of International Digital Government Research Working Groups. In 2006, CTG selected three groups of international researchers to receive funding to advance digital government (DG) research on issues that cross national boundaries. The groups were chosen through a peer review of proposed research programs that would benefit from close collaboration of U.S. and international partners. U.S. participation in the groups was supported by nearly $200,000 in travel funding over a three year period. Approximately 60 researchers from around the world have taken part in the efforts of these working groups.

For the past three years, the working groups have been exploring distinct areas of digital government such as evaluating the policy and other social impacts of online citizen consultation initiatives, developing a comparative and transnational research agenda targeted at questions about intergovernmental digital government initiatives in North America, and developing a prototype geoinformatic hotspot surveillance system.

“These projects are the vanguard of research on digital government questions of worldwide interest,” said Sharon Dawes, CTG senior fellow and principal investigator for the grant. “The working groups involve both seasoned researchers and young scholars in long-term efforts to understand and solve information-intensive problems that cross countries and cultures. This workshop will help us identify successful research strategies and practices that can be adopted in similar projects around the world.” 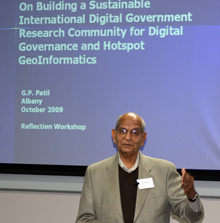