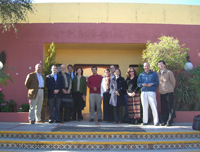 Members of the North American Digital Working group gathered in front of the main entrance of the Villas Arqueologicas Hotel in Cholula, Mexico.

The North American Digital Government Working Group held its second meeting recently in Cholula, Puebla, Mexico. The group is co-chaired by Theresa Pardo, deputy director of CTG, and Luis F. Luna-Reyes of the Universidad de las Americas, Mexico. The goal of the working group is to better understand the role of technology in the ability of individual nations to respond to domestic problems and to work together in response to transnational problems. The working group’s focus on Canada, Mexico, and the United States will allow the researchers to look at topics that are germane to North America as a whole.

The design of the second day provided an opportunity to spend a full-day with government officials from a variety of ministries of the Mexican Federal Government and other organizations involved in digital government in Mexico. The morning session consisted of a series of panel presentations on Digital Government, Information Society, and Innovation in Mexico. Following the panels, the working group members met in small groups with the panelists to discuss key areas of common interest and to explore future collaboration efforts.

The meeting also involved a variety of cultural events to provide the working group members with the opportunity to continue building their understanding of the cultures of the three North American countries.

Already, two initial projects are starting to consolidate as part of the research agenda and as potential sources of collaboration among the three countries. These projects include one to explore Border States Information Sharing, and another to explore Full Information Product Pricing Strategies to promote international commerce and regional development.

The North American Digital Government Working Group is one of four groups of international researchers to receive funding to advance digital government (DG) research on issues that cross national boundaries. The funding was made possible through a $1 million grant to CTG from the National Science Foundation’s (NSF) Digital Research Program (DG).