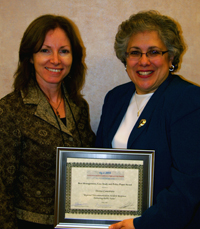 The Digital Government Society of North America’s 9th Annual International Digital Government Research Conference (dg.o 2008) was held May 18-21 in Montréal, Québec, Canada. The conference theme was "Partnerships for Public Innovation,” and was attended by government professionals, managers, researchers, educators, students, and others interested in the linkages among democratic processes, government management, innovation, information, and technology.

CTG continues to have a significant presence at dg.o both through program submissions and membership in the Society’s leadership. This year, CTG staff presented their project results at the conference in three papers, four posters, and during two panel discussions. Both Theresa Pardo, deputy director, and Sharon Dawes, senior fellow, sit on the Digital Government Society’s Board. Theresa also served as the sponsorship chair for 2008, a role which Donna Canestraro will take on for 2009.

The dg.o 2008 proceedings are available online via the ACM Digital Library.