CTG, University at Albany, and China National School of Administration Collaborate on Award Winning Paper for the 2009 Hawaii International Conference on System Sciences 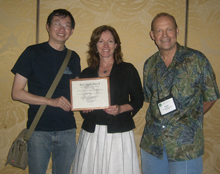 HICSS one of the oldest and most influential system sciences conferences, is a forum for the exchange of ideas among research and development communities from around the world. Since 2001, CTG has played an active leadership role in integrating E-Government within the overall research agenda at HICSS. E-Government, which began as a single minitrack at HICSS in 2001, is now a major conference track with eight separate minitracks.

At this year’s conference, HICSS-42, CTG deputy director Theresa Pardo and public administration doctoral student and CTG graduate assistant, Lei Zheng, were present to accept the Best Paper Award in the E-Government Track. The paper, Understanding the “Boundary” in Information Sharing and Integration, was also co-authored by Tung-Mou Yang, a graduate student from the College of Computing and Information, University at Albany, and Yuanfu Jiang, director of the E-Government Research Center, China National School of Administration.

CTG staff were also involved in three additional papers presented at the conference:

As in past years, CTG played a role in organizing the E-Government Track at HICSS. This year, Theresa Pardo served as one of the co-chairs of the Emerging Trends in E-Government minitrack with Karine Barzilai-Nahon (Center for Information and Society, The Information School, University of Washington), Lawrence E. Brandt (U.S. National Science Foundation), and Bjoern Niehaves (European Research Center for Information Systems). The Emerging Trends minitrack provides a venue for researchers to explore new trends in the direction and practice of E-Government.

Theresa was also involved in the organization of the afternoon portion of the Global Electronic Government Research and Practice Symposium at the conference, which was devoted to a discussion titled Identifying Grand Challenges of Transformative Research on Information Technology. The other co-organizers of the afternoon session were Jochen Scholl of the Information School at the University of Washington and Jing Zhang of Clark University.