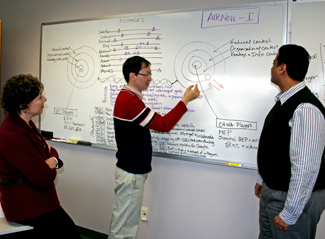 Members of the AIRNow-International Shanghai case study research team discuss the key elements of of a transnational knowledge network. From left to right Sharon Dawes, Lei Zheng, and Mohammed Ghawari.

Globalization brings problems and opportunities that demand sharing of knowledge, information, and practices across cultural and national boundaries. Environmental quality, international trade, and response to disasters are just a few of the areas where information and knowledge need to cross borders. A team of international researchers met recently at CTG for a two-day workshop to share their findings from research conducted in China, Mexico, and the United States in the area of binational air quality initiatives. They have been working together as a team conducting interviews and collecting data on two case studies as part of a National Science Foundation grant to better understand the character and dynamics of transnational knowledge networks and information systems.

The cases being studied include one in North America and one in China. The North American case involves the Joint Advisory Committee (JAC) for the Improvement of Air Quality in the air basin shared by Ciudad Juárez, Mexico; El Paso, Texas, and Doña Ana County, New Mexico. In the second case study, the US Environmental Protection Agency and the Shanghai Environmental Monitoring Center are jointly developing AIRNow-International Shanghai, an international version of the AIRNow air quality monitoring and reporting system that has been used in the United States since the mid 1990s. 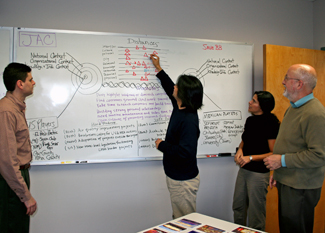 Using the two case studies, the researchers are addressing the following questions:

This project is also connected to a larger multi-year NSF-funded project at CTG which supported several international working groups focused on various aspects of international digital government. One of these groups, the North American Digital Government Working Group (NADGWG), was formed in early 2007 by researchers and practitioners from a variety of institutions and disciplines in Canada, the United States, and Mexico with the goal of advancing electronic government research across geographic and political boundaries in the region. Members of NADGWG played a major role in conducting the U.S.-Mexico case study.