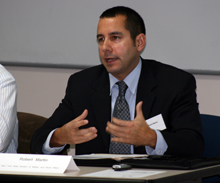 October 10, 2009 was a critical date for states throughout the U.S. with responsibility for reporting to the federal government on the distribution and impact of funds received and in some cases, redistributed, as part of the American Recovery and Reinvestment Act (ARRA).

At CTG’s November 20th Leveraging Technology for American Recovery and Reinvestment Act (ARRA) Best Practices and Knowledge Sharing Forum, attendees heard an insider’s perspective on how a cross-section of six New York State agencies prepared for the October 10th deadline. As part of an ongoing series about ARRA, CTG brought together state agency representatives to share their experiences and how they handled subrecipient reporting.

The level of reporting mandated by ARRA is not unprecedented; in fact, the federal government has been requesting this type of information from agencies who receive federal money for decades. However, the novel aspects of ARRA include the coordination of information from a variety of different programmatic areas, a central data repository between states and the federal government, the speed at which states are required to turn around data to a federal repository, and the desire and willingness to make information more accessible and transparent. While it is still too early to tell what the overall impact of these activities will be on government transparency and accountability, states like New York are using this experience to move towards new levels of intergovernmental collaboration.

The panel highlighted the experiences of six New York State agencies, some with less than ten stimulus grants, one with over 900 subrecipients. Despite the differences among the agencies in size, mission, number and dollar amount of stimulus grants, the challenges agencies faced preparing for October 10th were quite similar:

Larger agencies, such as the Department of Transportation (DOT) and State Education Department (State Ed) turned to their IT departments for their solutions, one saying “without them [IT] we would have failed miserably,” and another expressing, “the only way to get it done was through technology.” Smaller agencies reported developing solutions with little access to their IT departments. Whether they worked with their IT departments or not, they all pointed to the challenge of working within existing resource levels and finding ways to leverage what they already had in place; one agency noted the general mindset was, “what do [we] have on our computer right now that will work.” 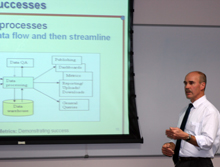 ARRA reporting systems used by the agencies ranged from a new data warehouse that pulled data from a dozen existing operational systems to expanding user access to existing Web portals used for financial management, to desktop application solutions such as MS Access databases and MS Excel spreadsheets to help capture and manage the data. According to the panelists’ comments, the number of stimulus grants received, in many ways, influenced technology needs. For example, DOT received over 400 stimulus grants for highway and bridge projects, as well as over 70 grants for transit, and was still waiting on over $500 billion requested in high speed rail to be awarded. These grants, because of the nature of the contracting process, were further split into various sub-awards over the lifetime of the project. For DOT, the decision was made early on that as an agency, they could not possibly go through hundreds of spreadsheets to collect, verify, and report data. According to the DOT representative, “spreadsheets would have killed us; we would have been buried in that approach.” Program staff turned to their IT department to build the necessary Web interfaces to gather the data into a data warehouse, allowing the agency to pull reliable data from existing systems. On the other hand, smaller agencies with fewer stimulus grants and little access to IT department resources, turned to MS Excel with great success to collect information on all of the 90 required data elements.

State agencies also developed sub-recipient reporting processes to coordinate the collection of ARRA data from local level governments, non-profit agencies, and private firms receiving money. Representatives described the wide range of technological capability among the various subrecipients which posed data quality and coordination challenges. Data quality was identified as a major issue for all of the representatives, especially those with the responsibility for ensuring the accuracy of data on projects awarded to subrecipients. In order to address this issue, Department of Environmental Conservation (DEC) found their best strategy was to focus on quality assurance of the subrecipient reporting by using internal control models and quantitative triggers and by focusing on areas they knew they could control. 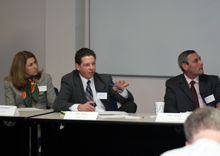 The State Ed, after being swamped fielding over 200 phone calls and emails a day from their approximately 900 subrecipients, focused on user training to address the issue of data quality and coordination. By employing an in-house Webinar resource, the State Ed held training sessions to educate subrecipients on reporting requirements. In addition, they alleviated the coordination of data collection problems by giving subrecipients access to State Ed’s existing financial management Web portal for online reporting. This approach left plenty of time for data cleansing.

Data governance emerged as a significant issue going forward, in particular for those applications that will live beyond the ARRA reporting requirements and become central to meeting new commitments to open government. 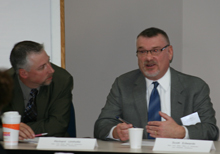 From left to right: Scott Edwards and Richard Umholtz, Office of Temporary and Disability Assistance

Panelists pointed to new kinds of internal collaboration and communication as key to their success in meeting their reporting requirements. Identifying stimulus teams early on, bringing program, audit, grants and finance staff together to create new ways of working, and developing new operating procedures were all noted as critical. Agencies found they had to work outside the norms of many of their standard operating procedures, with one panelist saying, “ARRA took us out of our comfort zones … it was refreshing and frightening all at the same time.” Department of Health found that their agency’s recently purchased MS SharePoint provided them with a new way of managing their internal processes; providing a single point of access for all staff, and serving as a central repository for all ARRA grants, documents, and templates, along with creating an audit trail.

Panelists commented on how their experiences with ARRA reporting are fueling some internal changes in operations. Many at the forum noted that leadership in their agencies were taking note of the value of the new data resources and work practices and asking “Why can’t we have this type of reporting for everything?” Many of the participants at the forum agreed with the panelists’ sentiments that the ARRA reporting requirements have triggered a new level of coordination around tracking spending on projects, and created new opportunities to provide the public with useful and usable access to ARRA information.