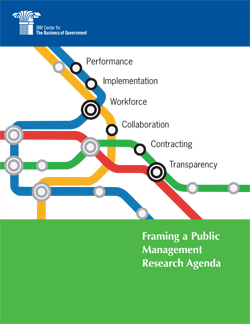 In November 2009, The IBM Center for The Business of Government hosted a forum to examine the Obama Administration's themes for a high-performing government and to frame a public management research agenda. Theresa Pardo, CTG director, participated along with nearly 50 of the nation's top public management researchers, scholars, and distinguished practitioners. The forum was an effort to help bridge the gap between research and practice, and to collectively develop a research agenda that would help government executives move things forward.

The forum was organized around key management priorities reflected in the Obama Administration's early months in office. To inform participants in the forum, the IBM Center invited four scholars to each prepare a discussion paper providing context and issues related to one of these priorities. These draft papers were shared in advance with participants and they formed the foundation for the conversations during the forum.

Pardo was invited as both a participant as well as a respondent to Joseph P. Goldman's (vice president, AmericaSpeaks) discussion paper, Transparency, Technology, and Participatory Democracy. "The forum presented an opportunity for CTG to share its 15 years of expertise in advancing research and practice on the interaction of policy, management, and technology use at all levels of government," said Pardo.

According to Jonathan Bruel, executive director of the IBM Center for The Business of Government. "The participants gained an early look at where research might help the administration address real-world problems and, in turn, more quickly produce empirical evidence to inform the debates about whether particular management approaches will improve government performance. They examined and discussed what the new administration hopes to do, what it has done to date, and where it is going. They also heard a call from several administration officials for 'immediate lessons'—a need to 'jump in right now' with actionable research about strategic as well as operational management."

The IBM Center recently released a report that includes all four discussion papers, as well as a series of research questions that participants helped develop during small group sessions, which they thought would be useful to both researchers and practitioners over the next few years. According to Bruel these questions are aimed at "stimulating and accelerating the production of actionable research. While not intended to be exhaustive, the agenda addresses some significant questions that would benefit from first-class, rigorous research to provide those in government lessons learned and insights to better address mission and management challenges."