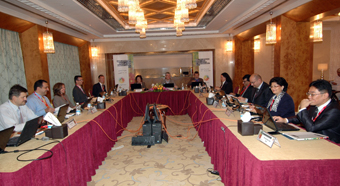 Theresa Pardo (third from left) seated with international members of the Jury, who were invited by the government of Oman to select the Sultan Qaboos Award for Excellence in eGovernment.

Theresa Pardo was one of 13 members from countries around the world invited to participate in the selection committee for the inaugural Sultan Qaboos Award for Excellence in eGovernment in Oman. The award has five categories and will honor Oman national government institutions whose digital government projects have provided exceptional achievements in furthering the development of eGovernment services in Oman.

In a press conference held to announce the award last March, Nasser al Khusaibi, Secretary-General of the Ministry of National Economy and Chairman of ITA’s Board of Directors, said: “It is with great pleasure and gratitude that we received the approval of His Majesty Sultan Qaboos for the allocation of an award for proficiency in the area of e-Government services. The award is expected to be an important incentive in the application of digital technologies in e-Government services.”

The selection committee—referred to as the Jury—met at the Al Bustan Palace Hotel in Oman from October 17-19. The Jury Panel members were chosen by the government of Oman in collaboration with the United Nations. Members were selected from leading countries in the field of eGovernment services in order to ensure objectivity and independence of the evaluation and arbitration process. In addition to the United States, countries represented on the Jury included Spain, Sweden, Denmark, Korea, France, Morocco, United Kingdom, India, Egypt, Syria, and Estonia.

Over three days, the Jury members discussed, assessed and shortlisted eighty-three projects submitted by thirty-seven governmental institutions in five categories of the Award. The five categories were: eContent, eService, eReadiness, eProject, and eEconomy.

In general, the successful nominations in each category needed to demonstrate one or all of the following criteria:

“I commend the government of Oman for using this award to highlight the quality of the eGovernment services in their country,” said Theresa Pardo, director of CTG. “The projects reviewed by the Jury Panel show a strong commitment to e-government systems that will promote greater efficiencies and improved citizen services for the people of Oman.”

The names of winners will be given through an official announcement and awards presented at a ceremony to be held December 28, 2010 in Oman.