CTG Releases Results from Study of Adoption of Broadband by Residents 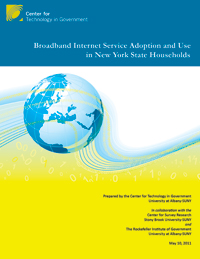 The Center for Technology in Government (CTG), in partnership with the New York State Office for Cyber Security and Stony Brook University, has released a report on results from a recent survey of New York households to discover the extent of adoption of broadband services and how those services are used. Overall, the results show that adoption and use of broadband is widespread and diverse, with a pattern of high user satisfaction overall, but that substantial disparities exist in both access and adoption for economically and socially disadvantaged New Yorkers.

“This picture of adoption and use of broadband in New York is grounds for optimism but not complacency,” said Anthony Cresswell, deputy director of CTG and lead author of the report. “Adoption rates and satisfaction are high overall, however disparities in access and opportunity are substantial and disproportionately affect the less privileged groups of New Yorkers.”

No single strategy appears sufficient for the challenges inherent in the survey results. The report recommends a combination of initiatives to reduce the overall costs of broadband, reduce knowledge and attitude barriers, and encourage investment in greater access and online security. Since the economic benefits of broadband are important for business as well, the report also recommends additional research on access, adoption, and use among users, especially small businesses in the low income areas of the state.

The results presented in the final report cover 1,002 surveys covering the state as a whole and an oversample of 2,042 surveys in low income counties. Key results from the survey showed the types of internet service available, and how adoption rates vary in significant ways depending on the household's racial, economic, and educational characteristics.

The survey results also gave insight into the ways residents typically use broadband and some of the barriers to adoption:

The project was undertaken in response to a request from the New York State Office of Cyber Security (OCS) in support of the activities of the New York State Broadband Development and Deployment Council. OCS is the recipient of a State Broadband Data and Development grant funded by the National Telecommunications Information Administration (NTIA). CTG developed the survey, worked with Stony Brook University on its administration, analyzed the results with the additional assistance of the Rockefeller Institute of Government, and wrote the report and recommendations.

In addition to the survey, OCS is participating in a nationwide initiative, also funded through NTIA, to map the availability of broadband service across the state. Visitors to the NYS Broadband Map website can query the map by street address to discover the types of broadband services available at any NYS location, with accompanying provider contact information. Residents can also contribute to the accuracy of the map by taking a speed test, developed by CTG, from their home computer.