As New York State government addresses the fiscal challenges of closing multi-billion dollar budget gaps, GTC East provides an important venue for sharing innovative uses of information technology to streamline state agencies' operations. CTG participated on panels throughout the two days of GTC East 2011 (September 14-15) at Albany’s Empire State Plaza, along with many others in New York State’s IT community, to share lessons learned in solving today’s IT delivery challenges. The panels provided a platform to foster discussion and dialogue on the use of information technology as a strategic tool for managers, executives and policy makers. 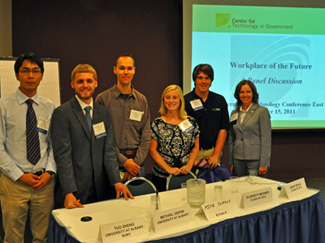 Theresa Pardo (pictured far right) moderated a session on the Workplace of the Future. Tuo Zheng (pictured far left), a doctoral student from Fudan University, China and currently a visiting scholar at CTG, was one of the student panelists.

Anthony M. Cresswell, was a panelist in the session Mobile Computing for the Public, which focused on the increasing pressure on government IT organizations to be more proactive in providing mobile services and applications that have potential to change how technology is delivered to government employees and the citizens they serve. Kurt Gerstner, Public Sector Lead for Application Modernization, Unisys and William Travis, Jr., Chief Information Officer and IT Deputy Commissioner, NYS Office of Children and Family Services, joined Tony in looking at examples of successful mobile applications being deployed by government.

Natalie Helbig moderated the panel on Applying Meaningful Metrics, which featured case studies of agencies that have implemented successful applications of performance measures and what you need to know to "measure up." The panel participants were Philip Bell, Deputy Director, ARRA Program and, Director, Strategy and Performance Management, Office of Design, NYS Department of Transportation and Terry Hastings, Deputy Director, Office of Counter Terrorism, NYS Division of Homeland and Emergency Services.

Pardo also moderated a session on the Workplace of the Future. The session featured a panel of students for an interactive discussion on how they view their use of technology and social media in the workplace and report on a national survey of students sponsored by NASCIO. Also participating in the session was Tuo Zheng, a doctoral student from Fudan University in China who is currently a visiting student at CTG.