The Open Government Partnership is a new multilateral initiative that aims to secure concrete commitments from governments to promote transparency, empower citizens, fight corruption, and harness new technologies to strengthen governance. In the spirit of multi-stakeholder collaboration, OGP is overseen by a steering committee of governments and civil society organizations. On September 20, 2011, the partnership was launched when the eight founding governments (Brazil, Indonesia, Mexico, Norway, Philippines, South Africa, United Kingdom, United States) endorsed an Open Government Declaration and announced their country action plans, and welcomed the commitment of 38 governments to join the partnership. 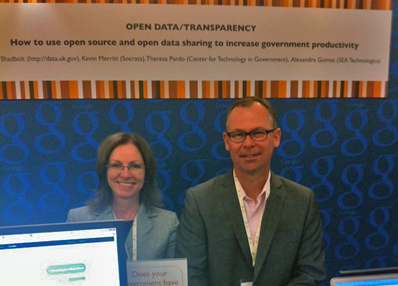 Theresa Pardo participated as one of the experts in the How-To Alley session, sharing CTG's practical advice on key open government challenges. She is pictured with Kevin Merritt, Founder & CEO of Socrata.

In conjunction with the formal launch of the partnership, OGP hosted The Power of Open, a high-level multi-stakeholder meeting that brought together governments, civil society, industry leaders, academics and the media for a series of panels and networking events focused on the role of openness in improving responsiveness, fostering accountability, creating efficiencies, promoting innovation and growth, fighting corruption, improving performance, and capturing dispersed knowledge in support of smarter policies.

Theresa Pardo participated as one of the experts in the How-To Alley session, sharing CTG's practical advice on key open government challenges. Pardo showcased CTG’s Open Government Public Value Assessment Tool (PVAT), which is designed to help governments maximize the potential value of their open government plans. The PVAT is a resource that can help countries identify the open government initiatives that have the most potential to deliver value, and allow governments to assess individual initiatives in ways that can help inform the development of their Open Government Action Plans. To be part of the OGP, the 38 countries will need to deliver their action plans at the OGP Annual Meeting in Brazil in March 2012.

Some of the critical questions the PVAT can help countries answer are:

CTG will be holding a Program for Government Leaders on November 29-30th, 2011 to provide an in-depth look at the PVAT tool. For more information, please contact Donna Canestraro.

More on CTG’s open government initiatives and work can be found at: www.ctg.albany.edu/projects/opengov.