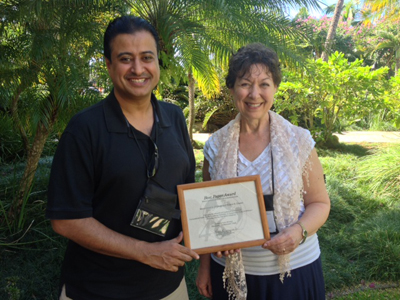 The Hawaii International Conference on System Sciences (HICSS) is one of the oldest and most influential system sciences conferences. HICSS is a forum for the exchange of ideas among research and development communities from around the world. Since 2001, CTG has played an active leadership role in integrating E-Government within the overall research agenda at HICSS. Electronic Government, which began as a single minitrack at HICSS in 2001, became a major conference track in 2009 with ten separate minitracks.

Since that time, the EGOV Track has continued to grow and at this year’s conference, HICSS-46, the track was number one (lowest) in terms of acceptance rate. The ten minitracks of the EGOV Track cover the full spectrum of research avenues of electronic government including ones dedicated to emerging topics, open government, and social media and social networking, or, most recently, insider threats.

According to Jochen Scholl, Associate Professor, University of Washington iSchool, Chair of the EGOV Track, UAlbany Alum and former CTG staff member, “The HICSS-46 Electronic Government track has been a hotbed for groundbreaking studies and new ideas in this particular research domain. Many studies first presented here were developed further and then turned into publications at top journals. The Track has assumed an excellent reputation among e-Government scholars. Several times it has been ranked the academically most rigorous research conference on e-Government in the world.”

Even more strikingly this year, the EGOV Track advanced to the number three spot in terms of overall (absolute) session attendance, in addition to retaining the highest average per session attendance. This places the EGOV Track on equal standing with the traditional "old big three" tracks at HICSS—Organizational Systems and Technology, Collaboration Systems and Technologies, Software Technology—which have been part of HICSS for 46 years.

At HICSS46, Theresa Pardo served as mini-track co-chair of Emerging Topics in the EGOV Track, which takes a look at new topics and trends that are emerging in e-Government. Sharon Dawes was one of the leaders of the full day symposium session on Four Years of Open Government: An Appraisal. The symposium attendees participated in discussion and workshop sessions to identify common issues and opportunities for research-practice collaborations.

In addition, former CTG Graduate Assistant, Mohammed Gharawi, and Sharon Dawes won Best Paper Award in the EGOV Track. The title of their paper is Exploring the Influence of Contextual Distances on Transnational Public Sector Knowledge Networks: A Comparative Study of AIRNow-Shanghai and the Hajj-MDSS Initiatives. The paper compared two case studies, one done as part of CTG's project on Transnational Public Sector Knowledge Networks and the other adapted from Mohammed's Ph.D. dissertation, completed in 2012 at UAlbany's College of Computing and Information, Informatics Department.