Last spring, CTG program associate Jana Hrdinová traveled to the Republic of Moldova to conduct social media training and to work with the Moldova eGovernment Center on drafting a social media policy guide for the government. Jana met with civil society representatives and government communicators to produce a set of recommendations that were incorporated into the final guide. 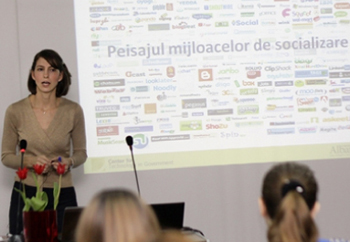 The policy guide that Jana produced in partnership with eGovernment Center is designed to help ministries and central government authorities to create internal procedures for managing the use of social networking. A revised version of the guide was recently launched by the eGovernment Center, after consultations with the civil society and government PR officers, so that the ministries can begin to synchronise their communication strategy with these guidelines.

The final document includes a set of rules and advice for civil servants about the use of social networking. It refers to social tools selection, content creation, responsibility for content and incorporating the feedback from citizens. Many of these guidelines are adapted from CTG’s Designing social media policy for government: Eight essential elements.

“The work that Jana and CTG put into this guide was invaluable,” said Stela Mocan, director of the eGovernment Center. “Their knowledge of the subject matter gave us the basis on which to create social media policies that were appropriate for our context, while at the same time covering all crucial areas connected to social media use in government.”

The Republic of Moldova has been internationally recognized for their egovernment initiatives. Most recently, Moldova and the eGovernment Center won two international prizes. They were awarded Best mGovernment - the best performance of a government in mobile communication for their Mobile Signature project by GSMA, which represents the interests of the worldwide mobile communications industry. In addition, Moldova’s Shared Government Platform M-Cloud was awarded Best Cloud Project in Central & Eastern Europe in a competition organized by the company Hitachi.