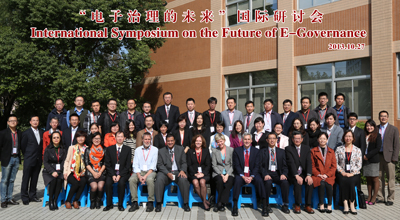 Theresa Pardo attended the International Symposium on the Future of E-governance at Fudan University in October 2013.

Theresa Pardo and Sharon Dawes recently accepted invitations to join the newly formed Advisory Committee of the E-Gov Chapter of the China Information Association. Also accepting were: Tomasz Janowski, Head and Senior Research Fellow of the Center for Electronic Governance at the International Institute for Software Technology, United Nations University; Marijn Janssen, Assistant Professor at the Section of Information and Communication Technology (ICT) at Delft University of Technology; and John Bertot, Professor and Co-Director, Information Policy and Access Center (iPAC), University at Maryland.

The e-Gov Chapter held its founding ceremony on January 21st. In a video message played at the ceremony, Theresa Pardo made the following remarks:

Together with my fellow International Advisors to the E-Gov Chapter, I look forward to working with the chapter to help the members realize their goals and to build bridges with colleagues and communities around the world.

The launch of this E-Gov chapter comes at a time when governments around the world are striving to improve the lives of citizens through technology innovations. Realizing this goal is challenging, but building such local, national, and global knowledge sharing communities is part of the answer to such challenges.

As director of CTG, I have had the pleasure to work with many government leaders around the world. Many talk about the need for such communities, few have moved from the idea to action. During my very first trip to China in 2007, accompanied by Dr. Lei Zheng, I met with a number of officials and scholars who were committed to the idea that effective use of information technology can change the lives of citizens. These individuals, notably among them, Dr Yu Shiyang, have worked tirelessly for years to help create new capability to be successful in the use of information technology in government.

During my most recent trip, this past October, I saw evidence that such a vision was becoming a reality. Under the leadership of Dr. Zheng, the International Symposium on E-governance at Fudan University provided an opportunity for over 40 scholars from top universities across China to share ideas and create new partnerships focused on information technology innovation in the interests of serving citizens. The new eGov Chapter provides a platform to continue the dialog started during that forum and others and to build on and support such efforts going forward.

In my role as president of the Digital Government Society, I look forward to working together with the E-Gov Chapter of the China Information Association to bring together our members and to create new knowledge sharing and collaboration opportunities. The Digital Government Society, formed in 2005, is a global interdisciplinary professional society devoted to advancing digital government through knowledge sharing about research, policy, and best practice. The society was formed by a similar community of professionals, who recognized the need and benefit of coming together on a regular basis to share knowledge and expertise in the interest of improving the practice of digital government around the world. We accomplish these goals through our annual conference, which we call dg.o, our website and newsletter, as well as through collaborative research and projects.

The society also provides a platform for the creation of partnerships with other societies and associations with similar goals and commitments. I look forward to working with members of the E-Gov Chapter in building such a partnership.

Again, on behalf on my fellow International Advisors of the E-Gov Chapter of the China Information Association, I congratulate you on this milestone event. It is our honor and privilege to accept your invitation to serve as Advisors and we look forward to future collaboration with the E-Gov Chapter.