A nationally recognized expert on urban revitalization and economic development spoke at a forum co-hosted by the Center for Technology in Government on Tuesday, April 19th about the issue of blighted and vacant properties in our region, and what some urban leaders across the nation are doing to create 21st century remedies. 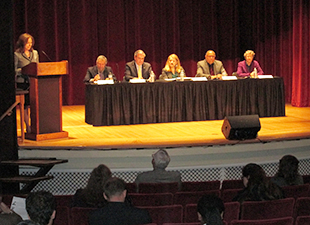 “The Impact of Blight on Communities: Definitions, Effects & Programs,” hosted by CTG, the Nelson A. Rockefeller Institute of Government, and the Center for Urban Studies at the University at Buffalo, framed the issue of urban blight within the context of New York State and the Capital Region and aimed to provide a holistic view of the forces that create blight, with a special focus on how other communities have addressed the issues - learning from both from efforts that have worked, and those that failed.

Alan Mallach of the Center for Community Progress in Washington, D.C., keynoted the event and spoke about how solving the increasingly persistent and costly problem of urban blight is a multi-faceted issue with multiple forces that both shape the problem and influence the strategies to address them.

The event, sponsored by Cisco, UAlbany's Division for Research, and TW&A Construction Management, also included a panel discussion with both research and practice experts including Schenectady Mayor Gary McCarthy, Nora Yates of the New York Governor’s Office, George Galster of Wayne State University, Henry Louis Taylor of UBuffalo’s Center for Urban Studies, and Susan VanDeventer of the Office of the State Comptroller.

Theresa Pardo, CTG director and the panel’s moderator, said the Center “is committed to working with cities throughout the world to help them think strategically about a variety of pressing public problems - urban blight being an incredibly important one. This forum gathered renowned experts who each brought a different perspective, allowing the discussion to be comprehensive and thorough.”

The event was simulcast for attendees at UBuffalo as well as webcasted.