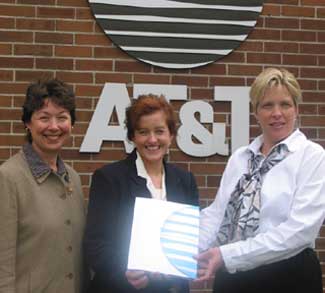 Albany, NY - The University at Albany's Center for Technology in Government (CTG) today announced it received a $20,000 grant from the AT&T Foundation to help expand testing of a prototype Internet Gateway that will link government agencies across the state.

This "G-to-G" Internet Gateway will test mechanisms needed to connect New York state agencies and local governments through an Internet portal designed to enhance intergovernmental working relationships, communication and transactions. The project is being coordinated by a partnership that includes nearly a dozen state agencies and local governments, three technology companies, and CTG. The AT&T grant enhances the in-kind contributions being offered by other corporate participants.

"We are very proud to take part in a project that promises to transform the way that government agencies communicate with each other," said Kathleen Westover, Sales Vice President - AT&T Government Solutions. "AT&T has a long history of supporting projects throughout the world that use technology in innovative ways and this project may be the model for the future."

"This field test will study the full technology, management, and policy implications of this type of information infrastructure," added Dawes. "AT&T's support will expand the field test of this project to some local governments that otherwise would not have been able to participate."

In addition to AT&T's support, the prototype is being built with in-kind contributions of three information technology corporations: CGI Information Systems and Management Consultants; Keane, Inc.; and Microsoft Corporation.

There are over 1,200 local and county governments in New York State, all with varying degrees of technological capacity. Prototype field-testing is being designed to capture what it will take to include local governments of all sizes and capabilities into an intergovernmental Internet Gateway.

The field testing with government agencies will begin after Thanksgiving and results will be compiled in December 2003. CTG expects the results of the prototype development and testing to guide the future of this G-to-G gateway concept throughout the world.

The Center for Technology in Government (www.ctg.albany.edu) is an applied research center devoted to improving government and public services through policy, management, and technology innovation. The Center, located at the University at Albany, works with government to develop well-informed information strategies that foster innovation and enhances the quality and coordination of public services.

AT&T (www.att.com) is among the premier voice and data communications companies in the world, serving businesses, consumers, and government. The company runs one of the most sophisticated communications networks in the U.S., backed by the research and development capabilities of AT&T Labs. A leading supplier of data, Internet and managed services for the public and private sectors, AT&T offers outsourcing and consulting to large businesses and government. The company is a market leader in local, long distance and Internet services, as well as transaction-based services like prepaid cards, collect calling and directory assistance. With approximately $37 billion of revenue, AT&T has about 40 million residential customers and 4 million business customers, who depend on AT&T for high-quality communications. AT&T has garnered several awards for outstanding performance and customer service.