The Center for Technology in Government at the University at Albany – SUNY was host to a two-day workshop to outline a research and development agenda focused on the use of government data to improve the lives of citizens. CTG partnered with the Tetherless World Constellation (TWC) at Rensselaer Polytechnic Institute, the Institute for Information Law and Policy at New York Law School (IILP), and Civic Commons. The workshop took place April 27-28 with participants from academic, government, private, and nonprofit organizations.

“The recent one-year anniversary of the Open Government Directive marks an important milestone here in the U.S. and around the world,” said Theresa Pardo, director of CTG. “Much has been learned about how government data, if treated as an asset to be shared, can make a difference in the lives of everyday citizens. Now is the time to take these early insights, whether about the potential of emerging technologies to make it easier for citizens to access and use data, or the relationship between open data and new models of governance, and organize them into a coherent agenda to guide future research and development in this area.” 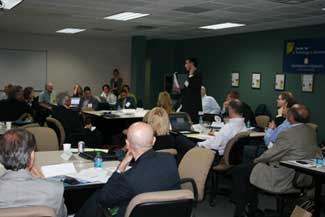 Participants at the workshop took part in facilitated sessions to identify research questions and begin to develop a research roadmap.

The workshop is part of a series of events being held in response to a need outlined in March of 2011 by Aneesh Chopra, the U.S. Chief Technology Officer at the Open Government R&D Summit, hosted in Washington DC by the National Archives and Records Administration (NARA) and The Networking and Information Technology Research and Development (NITRD) Program. Mr. Chopra called on academic centers to work with their partners to develop recommendations about the key research and development issues, questions, and opportunities that must be recognized and addressed as we move forward in the process of opening government.

“The workshop helped define a research roadmap for looking at the legal, policy, and technical questions that must be addressed,” said Beth Noveck, former U.S. Deputy Chief Technology Officer and current director of the IILP. “We hoped to expand current discussions among government leaders, funding agencies, foundations, civil society, and research scientists about government data and the potential of that data to improve the lives of everyday citizens.”

“Getting answers to these questions, and many more, depends on the development of new tools and techniques for bringing the vast stores of government data to citizens in useful and usable forms,” said James Hendler, Chair of the TWC, a center at RPI that explores the research and engineering principles that underlie the Web.

"In the face of budget crises, government entities at every level must cut costs and find efficiencies," said Andrew Hoppin, former New York State Senate CIO and current member of the Civic Commons Advisory Board and a consultant to New York City's Office of Technology Strategy. "The development of more open governments, equipped to share information more fluidly with citizens and with each other, represents an enormous opportunity to leverage existing government IT consolidation investments into dramatically more transparent, efficient, and participatory governments."

The workshop included participants from federal, state and local government agencies, academia, and the private and nonprofits sectors. Attendees represented a diversity of interests from the White House Office of Science and Technology Policy, the US General Services Administration, the Federal Communications Commission, and National Aeronautics and Space Administration; to Harvard, the Maxwell School at Syracuse University, and the University of Pennsylvania Law School; to a member of Governor Cuomo’s Spending and Government Efficiency (SAGE) Commission, NYS’s newly appointed Acting Chief Information Officer and the CIO of Broome County, New York; to The Sunlight Foundation, Knowledge as Power, and Socrata.

After a short presentation and discussion of the major research themes from the Open Government R&D Summit and a presentation about data disclosure efforts from Joel Gurin, Chief, Consumer and Governmental Affairs Division of the Federal Communications Commissions, participants focused on the following questions in large and small group discussions:

What are the key law, policy, technology and cross-cutting research questions related to use of government data for improving the lives of citizens?

How can open government research and development agenda that emerged be made actionable and relevant to stakeholders, including researchers, practitioners, and funding agencies.

More information about the workshop can be found at: https://www.ctg.albany.edu/projects/opengov.