“Over the past year, federal agencies have been dedicating resources to meeting the Open Government Directive,” said Theresa Pardo, director of CTG. “Using the lens of public value, CTG’s tool takes agencies through a review of their open government portfolios and helps them use that information to guide decision-making about which investments will likely produce the greatest value for stakeholders.” 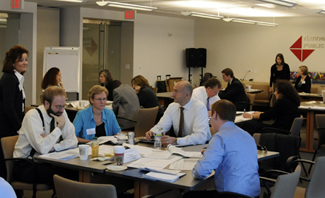 Meghan Cook, CTG program manager (standing on left), working with team from the U.S. Department of Transportation as they tested CTG's open government tool during the development phase.

CTG’s tool provides a structured way for governments to assess the public value of each of their initiatives; planned or ongoing, and to consider the relative public value of each. The tool guides agencies through a review of their open government plans to ensure limited agency resources are aimed at those initiatives with the greatest promise of advancing open government goals and agency missions. This assessment approach is based on a value framework that includes a range of social and political returns beyond the usual financial metrics so that these broad value results can be taken into account. The information generated can then support decisions about the mix of initiatives in a portfolio and how to adjust the mix of open government initiatives to enhance public value.

“Our office focuses on providing federal agencies with the tools and resources they need to deliver the most effective and efficient services to citizens,” said Martha Dorris, deputy associate administrator, Office of Citizen Services and Innovative Technologies, U.S. General Services Administration. “This tool gives federal open government leaders a new resource for assessing and planning their open government strategies.”

“As a partner in the tool development process, our Open Government team had the opportunity to test the portfolio tool and provide feedback. Using the PVAT we looked in a new way at our open government portfolio to see how our investments in openness and transparency could create value for a wide range of DOT stakeholders,” said H. Giovanni Carnaroli, Associate Chief Information Officer (CIO) for Business-Technology Alignment and Governance at the U.S. Department of Transportation. “Using the tool will provide us with new information about the relative value of each of our efforts; information that is essential to more informed decision making here at DOT.”

Meghan Cook, CTG's Open Government Project Lead, describes the process, "The timing of this work was perfect. While federal agencies were still in their first year of implementing their open government plans, we worked with a small set of program leads to test the underlying philosophy and assumptions of public value assessment and at the same time, learn about their existing planning processes. Through an iterative and real time approach, agencies used the PVAT in their planning efforts and then gave immediate feedback on functionality and usability. As a result, the end product is a practical tool that agencies can use as a way to plan, assess, understand, and document the public value of their open government efforts."

The development of this tool was funded in part by an Early Action Exploratory Research Grant (EAGER) from the U.S. National Science Foundation and in cooperation with the U.S. General Services Administration (GSA). The research included a mix of best practices analysis and engagement with federal agency representatives, state, and local government officials and scholars interested or involved in open government.