CTG and Albany Law Collaborate on Issue of Urban Blight

Students from the University at Albany and Albany Law School presented recommendations from the findings of a semester-long research project about urban blight to mayors and other city officials at the New York State Conference of Mayors (NYCOM) Annual conference on May 2.

Blighted and vacant properties consume resources, depress market values, and directly affect public safety and economic development. Many experts believe the cycle from blighted to demolition can be interrupted if there is access to information which identifies and tracks the cycle, combined with an understanding of the underlying causes of blight. 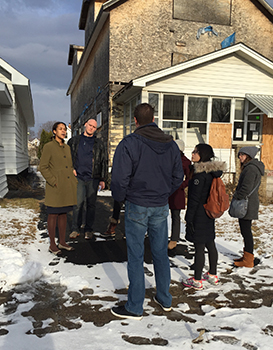 NYCOM is committed to partnering with academic institutions, and this project carried out in Albany and Schenectady in conjunction with CTG and Albany Law, shows true partnership,” said Peter Baynes, executive director, NYCOM. “The work the students did generated findings that are relevant to mayors throughout New York and we are thrilled they were able to present their work with us.”

At the conclusion of their work, the students provided the mayors and other city officials with strategies for utilizing the critical data needed to take action on vacant properties. In addition, they developed a legal outline for moving a property into city ownership, and worked on developing possible financial tactics that cities could use in order to fund blight efforts. A fourth initiative included coming up with possible community initiatives that could be effective in addressing blight.

“The Collaborative Venture Fund was designed as part of the affiliation between UAlbany and Albany Law School to expand collaborative research opportunities,” said Ann Marie Murray, associate provost for program development at UAlbany. “As one of the first projects funded, this work by the students met the very objective of the Fund and benefitted the students, the cities, and the Affiliation.”

“This project-based class helped students work in an interdisciplinary fashion and in teams, to both investigate the problem of urban blight as well as make recommendations to the leaders of the communities in which these students live to have a real impact,” said Albany Law’s Ray Brescia. “It is an example of the new and enriching opportunities that are and will be available to students of the UAlbany and Albany Law given the new affiliation that has brought the two world-class schools together in new and exciting ways.”

This experiential learning project is an outgrowth of CTG's work with four Capital Region cities on addressing the problem of urban blight through regional information sharing.