Advancing Return on Investment Analysis for Government IT: A Public Value Framework 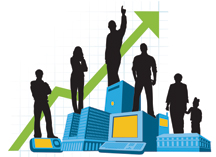 Every investment decision requires a leap of faith—sometimes a large one—into an uncertain future. However, after decades of investments in information technology (IT), running into billions of dollars, governments worldwide are largely unable to convincingly demonstrate a return on investment (ROI) that is widely understood or based upon well-grounded measures. While most can agree that government has been dramatically changed by IT, and many programs and services are more effective and less expensive as a result, government agencies are finding it increasingly difficult to communicate the public benefits of these investments.

For past investments in government information technology, the article of faith seemed to be, “If some is good, more will be better.” Those days, however, are rapidly coming to a close. Instead, those currently holding the government purse strings have a much more critical and skeptical perspective that, “If we scrutinize IT investments more closely, we will get better returns.”

This view is becoming more apparent, as evidenced in the July, 2006 report of the US Senate Appropriations Committee, which recommended zero funding for the administration’s 2007 e-government initiatives. The report says, “… the committee has no confidence that the amounts being assessed have any relationship to the benefits anticipated to be returned.” Similarly, the current appropriations bill in the US House of Representatives requires a cost-benefit analysis of all e-government initiatives. In describing the bill, Mike Hettinger, staff director at the House Government Reform Committee’s Government Management, Finance and Accountability Subcommittee said in a Federal Computer Week article, “the language speaks for itself and reiterates what the subcommittee has been saying for the past year, that in order for this initiative to be successful, we need to have a better understanding of the costs and benefits and clearer guidance for the agencies to follow.”

It will require more than a leap of faith to meet these requirements and justify even greater investments. And the size of investment is already substantial. The US federal budget for fiscal year (FY) 2007 provides $64 billion in funding for IT investments, approximately a three percent increase from the 2006 enacted level of $62 billion. Total state and local government IT spending was about $55 billion in FY 2004 and is expected to grow to over $62 billion by FY 2009. Although what is included in the IT category may vary across these examples, the overall scale is quite large. With this change in attitude, there is greater need for critical review and assessment. The low-hanging fruit available from early IT investments, such as establishing a Web presence and automating simple service transactions, has been largely harvested. More substantial improvements in government today typically involve exploiting the integrative and transformative potential of IT, but these projects require much larger investments.

These projects also require a way of assessing public value that matches their greater scope and complexity, and better mechanisms to build needed public support and guide development. The problem in doing so is not with the desire to better scrutinize these investments, but with the capability to do so. The principal part of that problem is on the value side of the question: namely, how to extend the concept of ROI beyond the usual cost savings and program evaluation methods. Public benefit, after all, is the basic purpose of government; thus the value of a government IT investment ultimately depends on how it fulfills that purpose. Connecting a particular IT investment to some observable public benefit, however, turns out to be quite difficult. This is partly a result of the inherent risk and complexity of government IT projects. Moreover, government IT investments, often specifically aimed at public value returns, such as increased security or transparency, are very challenging to define and even harder to measure.

This difficulty is evident in IT investments both in the United States and internationally. In 1999, the Israeli government undertook to restructure the financial, logistic, and human resource components of governmentwide administration into an integrated Enterprise Resource Planning (ERP) system, in a project called Merkava. It became apparent to those involved that they needed to think much more broadly about the goals of this project. According to Nir Gilad, former accountant general of Israel, they asked themselves, “Who is our customer? The first one that we defined is ourselves. We are serving ourselves to maintain our capability to run the systems that we are in charge of. But very quickly we came to the decision that it’s ridiculous that we are building systems that are serving ourselves.” They realized the value must accrue ultimately to the external customer, the public. This value is not, however, fully measurable in terms of financial results. The full value of government IT investments can be found by looking for both the internal value to government operations, plus the broader political and social returns to the public at large.

To do so, however, first requires a change in perspective, namely to consider the value question from the point of view of the public rather than from inside the government. From this point of view we can see two sources of public returns: (1) value that results from improving the government itself as an asset to the society, and (2) value that results from delivering specific benefits directly to persons or groups.

Value creation can therefore come as much from increasing the integrity and transparency of government as from reducing costs through activities such as online tax processing, license application and renewals, obtaining information, filing forms, etc. The public value propositions for these investments go beyond the important but obvious cost and time savings to include attention to service quality, access, and equity, to name a few. This take on value also includes many stakeholders, each with special interests and expectations from government; many kinds of public interests require an expansive way to view public value.

CTG developed a public value framework to give government IT executives and analysts an assessment tool in which this point of view of the public, not the government, is the basis. The main goal was to produce an assessment of public returns that is credible, persuasive, and highly relevant to the investment decisions faced by the government. The framework shows how to take into account how public value can change across the many interests of citizens and groups in interacting with governments.

Service New Brunswick (SNB), located in New Brunswick, Canada, is well-known internationally for its expertise in providing multi-channel “single window” citizen access to government services, as well as for developing and maintaining geographic information databases. In the case of SNB, Web access to company registrations provided direct value to citizens or stakeholders such as accountants, lawyers, financial institutions, and the general public searching for such business information. According to Darrel Fowler, director, project delivery for SNB, “Without the concept of ‘public value’ as a return on investment, it would be very difficult to gauge how much benefit a decision to invest in an IT initiative can have.”

In addition, the decision by a leading IT services company, CGI Group Inc., to locate its global e-government headquarters in Fredericton, New Brunswick, due in large part to its strong partnership with Service New Brunswick, benefits the economic development of the city of Fredericton and surrounding areas in the province. This is a very powerful demonstration of the broader public value of SNB’s investment well beyond the direct benefits to citizen and government users of the system.

The desire for a more comprehensive and robust justification for new IT investments reflects their greater complexity and ambition. Conventional ROI analysis is simply inadequate to meet elected officials’ demands for greater scrutiny. Therefore, using such an expanded scope of assessment, even though more expensive, is both critical and necessary. The new knowledge about public value made available by using such a broad framework can meet both political and citizen demands. In addition, it can help guide other forms of investment, both IT and non-IT, and provide a basis for analyzing how multiple investments can work together and contribute to a more fundamental improvement in government.

CTG developed a public value framework as a systematic way to identify and assess as wide a range of public value as possible. There are six main types of public value in the framework: Financial—impacts on income, asset values, liabilities, entitlements, or risks to these factors.

Each kind of value can result from one or more of the value-generating mechanisms in government operations associated with new IT: